The extraordinary exercise program based on the revolutionary body-improvement system developed by Dr. Moshe Feldenkrais.

With these brief (10-30 minutes) exercises, anyone can learn to improve their posture, flexibility, and physical comfort, and end the energy drain caused by muscular tension. This popular application of techniques — never before available in such an easy-to-use form — targets such key areas as the lower back, shoulders, neck, spine, eyes, feet and jaw. Enhanced vitality and elimination of pain and stress will be yours through these thoroughly researched and patient-tested techniques that actually re-program the neuromuscular system.

In 1942, Dr. Moshe Feldenkrais, a brilliant and respected physicist working in London, faced one of the most critical challenges of his lifetime. Because he had suffered a series of sports-related knee injuries, he was now painfully crippled. He was confronted with the possibility that he might have to spend the rest of his life using either crutches or a wheelchair. The medical specialists had given him a disheartening prognosis. In their estimation, there was a 50 percent chance that surgery could repair his knees. But they warned that if the surgery failed, it could drastically reduce his chances of ever being able to walk again. He had to decide: Should he undergo the surgery — or was the risk too great? Might there be other solutions?

Feldenkrais approached his unenviable dilemma with characteristic determination and a special understanding of both the human body and contemporary science. He had been the first European to receive a black belt in the Japanese martial art of Judo and had written five definitive books on its technique and theory. As a physicist, Feldenkrais was accustomed to solving problems that had tested the brightest minds of his generation. For many years he had been a close associate of French Nobel laureate physicist Frederic Joliet-Curie. Together they had conducted some of the very first experiments in atomic research. Could Feldenkrais apply his knowledge of physics and the human body to find a way to regain the use of his legs?

Feldenkrais chose not to undergo the proposed surgery. Instead, he began to study neurology, anatomy, biomechanics, and human movement development. He knew that in order to walk again, he would have to find a way to create new neurological connections between his nervous system and his muscles. After two years of research and experimentation, Feldenkrais emerged victoriously. He succeeded in completely restoring his ability to walk. Feldenkrais had developed a way to improve his body by activating the natural power of his brain and nervous system.

Inspired by his personal success, Feldenkrais continued to explore the profound link between the brain and the body and developed hundreds of unique exercises designed to access the movement learning centers of the brain. Feldenkrais tested his new ideas with his friends and colleagues. He treated their aches and pains, muscle and joint problems, and even debilitating neurological conditions. One after another, their symptoms disappeared. It was obvious that Feldenkrais had discovered an extraordinary new approach to physical improvement.

In 1949, Feldenkrais published his theories about the relationship between human movement and the nervous system in Body and Mature Behavior, a book still widely read. The following year, he became a professor of physics at the famed Weismann Institute in Israel, while continuing to apply and refine his unique neuromuscular exercises. By 1954, there was such a great demand for his new knowledge and skill that he decided to leave physics and dedicate himself to helping others improve their health.

Soon, people from all over Europe were traveling to Feldenkrais’ popular clinic and classes in Tel Aviv. His classes were attended not only by people suffering from physical problems but also by musicians, athletes, dancers, and thousands of other people from every walk of life. In 1972, Feldenkrais was invited to the United States to present his work at health institutions and universities. The response was overwhelming, and for the next decade, he spent part of each year in the United States teaching and lecturing.

Before he died in 1984, at the age of 80, Feldenkrais trained a small group of practitioners to continue his work and make it available to a wider public. Since his death, over 1,000 new practitioners have been trained and accredited. Two authors of this book (David Zemach-Bersin and Mark Reese) were fortunate to be among the first Americans to study with Dr. Feldenkrais. They spent over 10 years studying and working closely with him in both the United States and Europe. In 1983, they joined forces and began to collaborate on the development of Relaxercise an exercise system designed to make the benefits of Feldenkrais’ remarkable neuromuscular exercises available to everyone who would like to feel better.

This book is an introduction to both Relaxercise and the genius of Feldenkrais. It contains ten basic exercises to improve your health and well-being. Welcome to Relaxercise — we are sure you will enjoy the exercises and find them the easiest, most pleasant way to maintain a healthy, youthful, pain-free body.

When we were small children, we learned how to sit up, roll over, crawl, stand, walk and run. These accomplishments were achieved through an important natural process of trial and error. To learn how to walk, we first had to learn to stand up, maintain our balance, and take a single step. Only after falling down and getting up over and over again, were we finally able to take many steps, one after another, without losing our balance and falling down.

Scientists call this process sensory-motor learning. “Sensory-motor,” because it involves the use of our senses — sight, hearing, balance, and touch — in conjunction with movement. And “learning,” because as a result, we learn how to do something new.

Sensory-motor learning is how all physical learning takes place. It occurs through an information feedback process between your senses, muscles, and brain. As your body moves, your senses of touch, balance, and sight send your brain information about your body’s position and muscular activity. Your brain responds by modifying the outgoing messages to your muscles.

Be the first to review “Relaxercise” Cancel reply 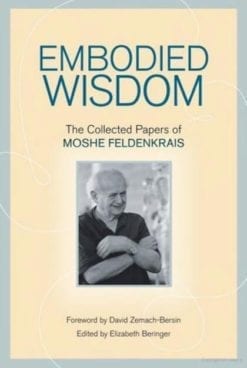 The Feldenkrais Method: Teaching By Handling

The Little Book of Falling (And Getting Up)