Skip to content
On Better Judo – Introduction
by Moti Nativ – 2017

Better Judo is a series of 5 articles, published from January 1948 until January 1949, which Dr. Feldenkrais wrote for the quarterly bulletin of the Judo Budokwai Club.

“A true secret is still a secret even when it is revealed to all.” – Rabbi Adin Even-Israel Steinsaltz, Preface to The Thirteen Petalled Rose1

Judo concepts and techniques had a significant impact on Dr. Moshe Feldenkrais’ development of the Feldenkrais Method for improving a person’s abilities in action. We can see the results in many Awareness Through Movement (ATM) lessons, although the judo component may not always be obvious to those without the proper background. 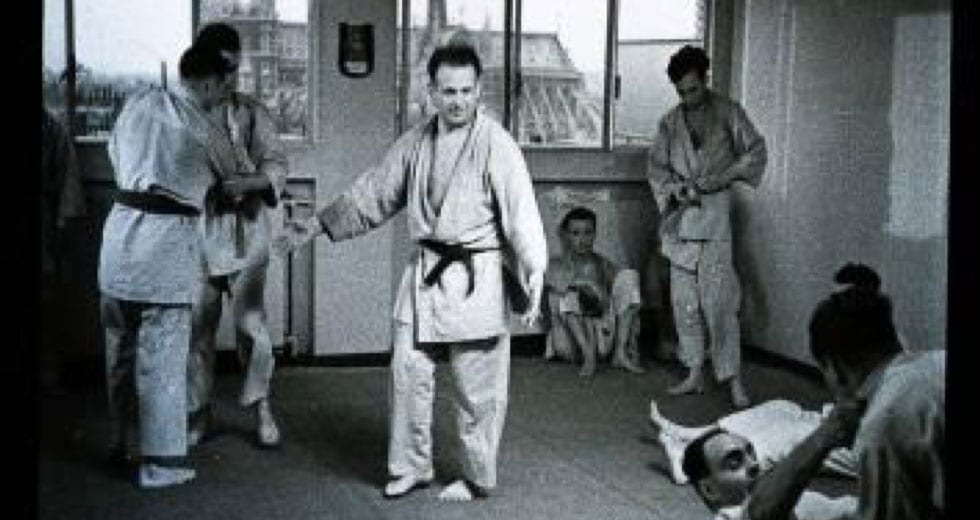 (Moshe Feldenkrais teaches Judo – Paris 1938, Notre-Dame view from the Dojo’s window)
Feldenkrais became involved with judo when he met its founder Professor Jigoro Kano, in Paris, September 1933. This was not merely a meeting between two giants, it was an event that would lead to a dramatic change in the direction and trajectory of Feldenkrais’ thinking. In his famous 1981 interview about martial arts, Moshe recalled that Kano had said to him that judo is “the efficient use of the mind over the body.” At the time, Moshe had thought that this was a funny way to describe a martial art. During their initial meeting, Moshe was introduced to the concept of seiryoku zenyo (minimum effort, maximum efficiency). Kano challenged Moshe with a judo choking technique. Moshe attempted to free himself using the technique that had always worked for him, but this time it did not help him. 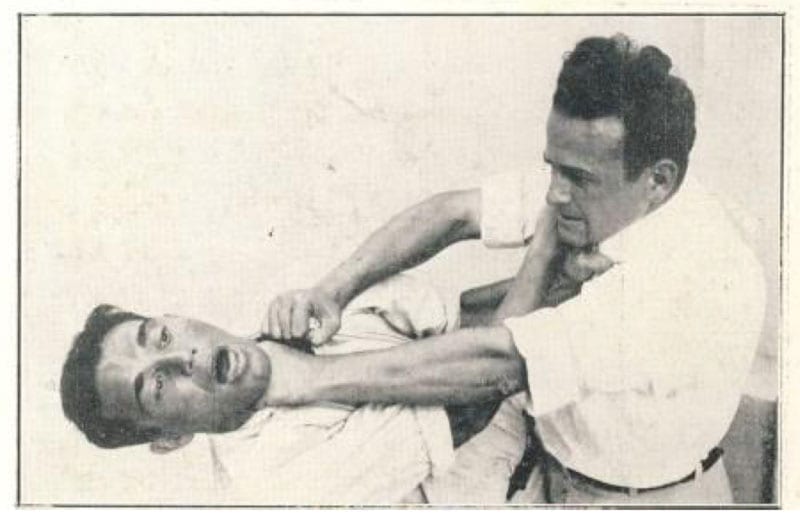 1. Translated from the Hebrew edition. 2. Mind over Muscle (writings from the founder of judo), Gyaku-juji (pages 47-50). 3. Pro. Jigoro Kano, Introduction to Moshe’s Jiu-Jitsu La Defense du Faible Contre L’agresseur (French version of Jiu-Jitsu and Self-Defense) “At that time a Jewish scholar named Feldenkrais happened to be in the audience. His remarks to me after the lecture were very enlightening. He brought a book he had written about judo with him and asked me to take a look at it … I realized that though this book does not exactly confirm with the concept of my Judo, it is the best publication in another language than Japanese…I feel assured that the author, by a study of the true Judo, will progress rapidly towards a perfect possession of this method”. 4. Brousse, M. (2002), Le Judo, son Histoire, ses succès, préface de Jacques Rogge, Paris: Liber, 212 p. Édition revue et augmentée. This book was written for the celebration of the 50th anniversary of the French Judo Federation. 5. Gunji Koizumi (1885 –1965), was a Japanese master of judo who introduced this martial art to the United Kingdom, and came to be known as the ‘Father of British Judo’. He was the founder of the Budokwai. 6. G. Koizumi knew Dr. Feldenkrais as a Judoka – a student, a teacher and a scientist. He appreciated Moshe’s contribution to the Judo community. Quoting from Koizumi’s forward to Higher Judo: “Dr. M. Feldenkrais has made a serious study of the subject, himself attaining Black Belt efficiency. He has studied and analyzed Judo as a scientist in the light of the laws of physics, physiology, and psychology, and he reports the results in this book which is enlightening and satisfying to the scientific mind of our age. Such a study has been long awaited and is a very valuable contribution to the fuller understanding and appreciation of the merits of Judo. Dr. Feldenkrais, with his learned mind, keen observation and masterly command of words, clarifies the interrelation and the intermingled working of gravitation, body, bones, muscles, nerves, consciousness, subconscious and unconsciousness and opens the way for better understanding.” 7. T.P. Leggett – The first Chairman of the European Judo Union. Notes from the First General Meeting of the European Judo Union – July 26th 1948: The election of officers resulted in Leggett being appointed Chairman and Lt. Thieme of Holland as Vice-Chairman. The next move was to form a Judo Council (a technical body as opposed to the General Committee). Those elected were: Mr. G. Koizumi, Dr. M. Feldenkrais, Mr. P. Bonnet- Maury, Mr. E. Mossop, Mr. T.P. Leggett. France intervened with the suggestion that each of the important judo countries should be represented on the Council. As Chairman, Leggett pointed out that the purpose of the Council was not to represent national interests but to be composed of real judo experts. At that time Moshe was a man with no country (Moti Nativ). 8. Dr. Michel Brousse, “The encounter of these two men [Kano and Feldenkrais] is a decisive moment in the history of Judo in France. The relationship of mutual esteem united the two men. Feldenkrais reoriented the teaching of jujutsu in France.” (Translated from French). 9. Judo books by Moshe Feldenkrais: A.B.C. du JUDO (1938), JUDO – the Art of Defense and Attack (1941), Higher Judo (1951) 10. Self-defense books by Moshe Feldenkrais: Jiu-Jitsu and Self-Defense (1930), Practical Unarmed Combat (1942) 11. Dr. Mike Callan (m.callan@chi.ac.uk) – Holds the judo grade of 7th Dan. The President of the International Association of Judo Researchers, and a Scientific and Didactic Expert for the European Judo Union. He founded the Richard Bowen Judo Archive at the University of Bath. 12. The Budokwai (武道会 The Way of Knighthood Society) in London is the oldest Japanese martial arts club in Europe and the first judo club in Europe. It was founded in 1918 by Gunji Koizumi. https://en.wikipedia.org/wiki/Budokwai 13. “Turning Point” – foreword by Moti Nativ to Higher Judo: Groundwork (2010). 14. Foreword to Thinking and Doing (2013), were chapters that Feldenkrais added to the original. These chapters were published in the English translation in 2013 and appeared in the original translation into Hebrew in 1929. 15. Kōdōkan Goshin Jutsu (講道館護身術)is the Judo skills of self-defense. This is a set of prearranged self- defense forms in Judo. It is the most recent kata of Judo, having been formally created in 1956. It consists of several techniques to defend oneself from unarmed attack, attack with a dagger, with a stick, and with a gun. 16. M. Feldenkrais, The Master Moves, Lesson One: Twisting to the Floor, page 38.

4 thoughts on “On Better Judo – Introduction”